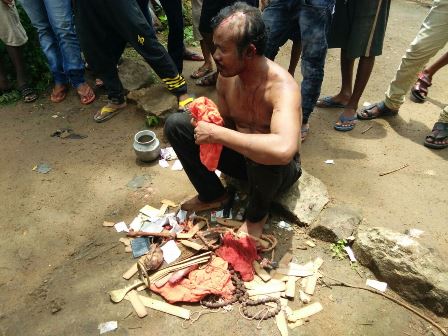 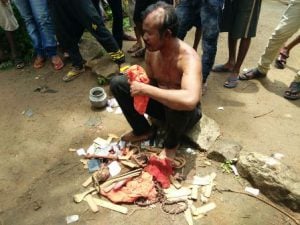 Ganjam: In yet another witchcraft related incident in the State, a man was beaten up by an angry mob in Deogaon village under Kabisuryanagar police limits on Monday.

The accused who is yet to be identified was nabbed by some locals in the Deogaon village this morning for allegedly carrying some items used in the practice of sorcery. After conducting a thorough search of a bag carried by him, the villagers found several pieces of human bones along with texts on witchcraft inside it.

Following the incident, the angry mob tonsured his head in full public view and paraded him through the village. Later, the villagers tied the man to a tree and started thrashing him brutally inflicting head injuries on him.

Getting information on the incident, Kabisuryanagar Police reached the spot and freed the man from the clutches of the locals.

Informing on the incident, some villagers claimed it was an outburst of people’s resentment over growing sorcery practice in the Kabisuryanagar area over the last couple of months. They said a number of persons have died under suspicious circumstances in the area recently and locals fear that they could have fallen prey to this unscientific practice.