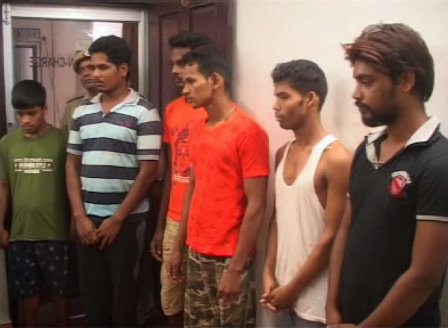 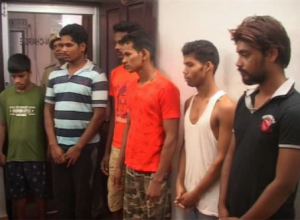 Berhampur: Berhampur Sadar Police arrested six members of a robbers’ gang on the prowl in the area while they were hatching a plan for dacoity in Balipada village on Tuesday night. Seven bombs, one sword, 11 mobile sets and Rs 4,400 in cash were recovered from the arrested gang.

The arrested criminals have been identified as Kuna Gouda, Cheru Gouda and Panda Gouda from Lathi and Pramod Kumar Mohanty of Bhanja Nagar, Sunil Kumar Nahak of Khajuria and Ajay Lenka of Chancharapalli village in the Ganjam district.

According to sources in the police, while on patrolling on Tuesday night, Sadar police got a tip-off on the presence of a robbers’ gang in Balipada area at around 2 am. The police team, led by Sadar Police IIC, immediately raided their hideout located inside an under-construction building and nabbed six members of the gang while they were planning for a dacoity. Two others managed to give the slip to the police during the raid.

Speaking to media persons about the arrests, Berhampur Sadar Police Station SDPO said the arrested criminals have confessed to being involved in a number of crimes in the district during interrogation. He informed that one of the arrested Cheru Gouda had received a bullet injury during an encounter with the police earlier and was trying to commit another crime while on bail. The arrested criminals were involved in separate cases of dacoity, attempt to murder and bike lifting incidents in Lathi area, he added. The group members were also involved in tractor theft cases in Nuagaon and Digapahandi areas and a bomb hurling case under the Sadar Police limits.

A police team with officials from Digapahandi, Nuagaon and Gosani Nuagaon has been formed nab the two members of the gang who managed to escape, police sources said.