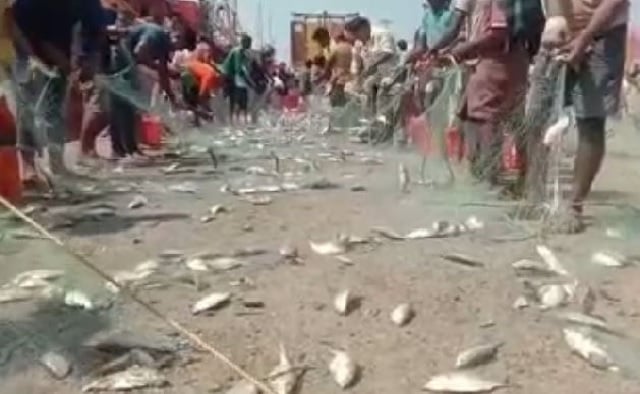 Bhadrak: In a rare incident, more than 50 quintals of Ilish fishes were caught by a fisherman in the Dhamra jetty of Bhadrak district in Odisha on Saturday.

As per reports, the huge amount of fishes was entangled to the net spread by a fisherman named Biki Mandal of Karanpalli area. He had ventured into the deep sea yesterday night on his boat bearing registration number IND OR 01 MM544 Maa Sitala 34 when these fishes got entangled in his net.

The amount of fish was so huge that the fisherman could not pull the whole net and so cut half of the net and flowed in the sea and later returned to the shore along with rest of the fishes entangled to half of the net.

The fishing net was seen spread a long way from the boat to the jetty. The fishes that have been caught are said to be Ila. It resembles like Ilish but smaller in size. It costs in between Rs. 70 and Rs.100.