In a play of nature, the fight for survival between two reptiles was captured. Watch the clip of an anaconda crushing a crocodile to death. 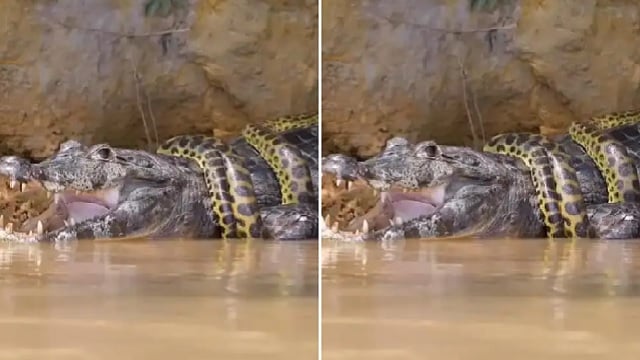 In a recent viral, video clip of a Giant anaconda crushing a crocodile to death has surfaced on the internet. The anaconda has been identified to be of a boa species native, belonging to the northern regions of South America. The species of anaconda is generally found in water like swamps and streams. The bodies of these snakes can stretch up to 30 feet and they weigh up to 250 kilograms. The smaller anacondas live on their prey like smaller mammals, birds, fishes, etc., while the adult ones have the capacity to consume the much larger animals.

The video clip was shared on YouTube by a channel named ‘Viral video’. It shows a giant green anaconda wrapped around the body of a crocodile in the water, while the crocodile struggles to catch a breath. The snake tightened its hold around the crocodile, thereby causing its death. The massive fight for survival between the two reptiles was captured through a camera and floated online. the video caught the eyes of the internet and was considered ‘fascinating’ by the netizens.

Take a look at the video of the anaconda crushing the crocodile to death: