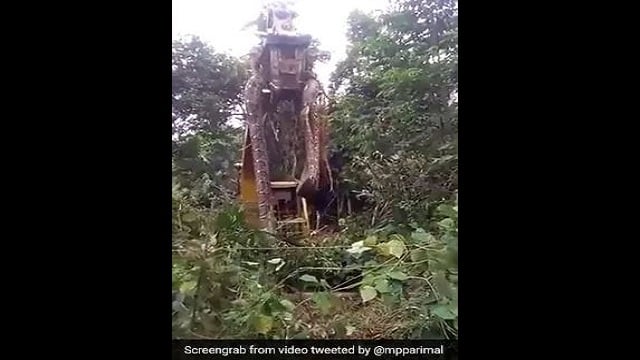 A video of a huge snake being lifted up by a crane is going viral on the social media platforms these days. The 26-second long video went viral after it was shared by Rajya Sabha MP Parimal Nathwani on his Twitter handle.

“Massive! It took a crane to shift this #python weighing 100 kg and measuring 6.1 m length, in Dhanbad, Jharkhand,” he wrote while sharing the video on Twitter.

While millions are stunned at the size of the snake, there is confusion among them and the media houses regarding the origin of the video. Several news articles, in fact, speculated that it could be the largest snake in the world.

However, a report of The Mirror revealed that some workers found the snake while clearing part of a Dominica rainforest and the video was shared on TikTok by @fakrulazwa.

Likewise, NBT Bihar confirmed that the snake was not found in Jharkhand as the Dhanbad district administration clarified saying that no such snake was found in any part of the district.

On the other hand, the New York Post’s article said that it is not clear what kind of snake is that but the boa constrictor is one species that can grow up to 13-feet and are found in the Caribbean island.