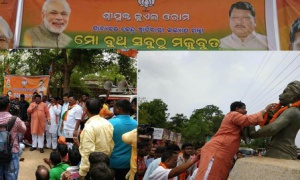 Bhubaneswar: In a bid to connect with the people at the grassroots level, the BJP on Tuesday kick-started the ‘Mo Booth, Sabuthu Majboot’(My Booth Strongest’) campaign. Union Minister Jual Oram launched the campaign in at Booth-54, Godibari in Chadaka under the Bhubaneswar Parliamentary Constituency.

The Union Minister first garlanded the statue of Pindiki Bahubalendra, eminent freedom fighter and then went on to launch the programme. A membership drive was also held on the occasion.

As part of the ‘Mo Booth, Sabuthu Majboot’ campaign, the BJP is looking to reach out to more than 35,000 booths in the state with the help of 10,000 members.

BJP President Amit Shah is scheduled to arrive in the State for a three-day visit later this month to boost the campaign.