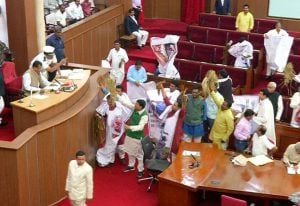 Bhubaneswar: Odisha Assembly Speaker Pradip Kumar Amat adjourned the House till tomorrow after both Congress and BJP created ruckus in the House on the first day of the Winter Session today.

Holding the damaged paddy crops the opposition legislators rushed to the Well of the House and created turmoil. Some of them even threw the paddy crops to the podium of the Speaker, following which Amat adjourned the house for an hour.

On the other hand, the ruling BJD MLAs including some Ministers staged dharna in front of the statue of Mahatma Gandhi inside the Assembly premises demanding Union Government to hike the Minimum Support Price (MSP) for paddy.

As the House met again after one hour, the Opposition lawmakers reiterated with their commotion over the same subject,  forcing the Speaker to adjourn the House till tomorrow.

The Session will continue till December 30.