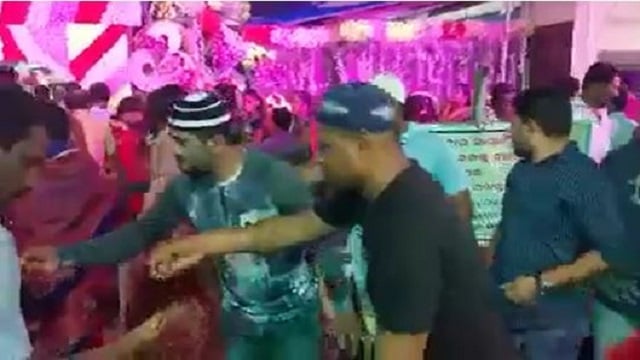 Cuttack: The silver city of Cuttack celebrates Durga Puja with much fanfare. The celebrations transcend all religious barriers only to show the unity and brotherhood of the city.

In one such act, the Hindu devotees going for a visit to Maa Cuttack Chandi temple were greeted with sweets by Muslims.

It is noteworthy that, a huge gathering of devotees has been witnessed in the famous temple of the ruling deity of Cuttack city, ‘Maa Cuttack Chandi’ during the ongoing Navratri celebrations.

The video of the Muslims distributing sweets in front of the Chandi mandir, is unique indeed. The people of Cuttack city are one of the best examples of brotherhood and community living.

This act has further strengthened the unity and feeling of brotherhood between the Hindus and Muslims. It has also proved that the Silver city of Cuttack is a shining example of religious unity and togetherness.

Miscreants Beware! 500 CCTVs To Be Installed In Cuttack…

It is noteworthy that, the five-day Durga Puja festival and celebration in Cuttack transcends barriers of religions with participation from all communities.

A number of Muslims are engaged in making silver filigree (tarakasi) work for the idols and backdrop (chandi medha) of Maa Durga. Many denizens of the Silver city believe that everyone celebrates the festival together as it is a city of brotherhood.

The Sheikh Bazaar Puja Committee in Cuttack for example highlights the fact that their Puja committee consists of members from Islam and Christianity.

It is noteworthy that the Durga Puja preparations have started in full swing all over Odisha. The artisans across the city of Cuttack are busy in giving finishing touches to the idols.

According to reports various hi-level meetings, discussions are being held across the twin cities regarding repairing of roads, uninterrupted electricity and drinking water. Focus was also given on how to celebrate the Puja peacefully and for the smooth immersion of the idols after festival.