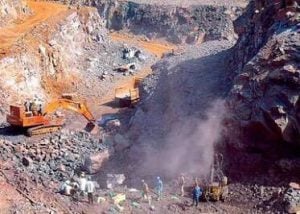 New Delhi: Striking a body blow to companies involved in illegal operations in Odisha, the Supreme Court on Wednesday upheld the Rs 60, 000 crores fine imposed by the state government on these companies for illegal mining during 2000 to 2010.

In its verdict on Wednesday, the two-member apex court bench comprising Justice Madan B Lokur and Justice Deepak Gupta asked the companies, which have been served the notice by the Odisha government to deposit the due on or before December 31, 2017.

Rejecting the Central Empowered Committee’s contention for a fine 30%, the apex court said the violators will have to pay 100% of the cost of the ore illegally mined

The bench asked the chief secretary of Odisha to file an affidavit in this regard by within the next six weeks. The court also directed the Union government to have a fresh look at the National Mineral Policy, 2008 and complete the exercise by December 31, 2017.

The court ruled that the companies can carry on with their mining operations after paying paying the penalty imposed on them by the state government.

The court, however, refrained from ruling on the prayer for a CBI inquiry into the mining scam in Odisha made by petitioners Prashant Bhshan of Common Cause, Prafulla Samantara and others. The bench suggested formation of an exert committee headed by a retired Supreme Court judge to look into the factors that made rampant illegal mining possible in Odisha and elsewhere.

In April of 21, 2014, lawyer-activist Prashant Bhushan, on behalf of the NGO Common Cause, had filed a petition in the apex court seeking action against leases indicted by the MB Shah Commission on illegal mining in Odisha.

The senior lawyer also wanted a CBI investigation into the connivance of officials that had allowed large scale illegal mining in the state between 2000 and 2010.