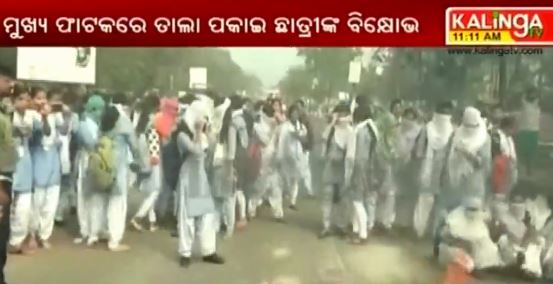 Bhubaneswar: Tension gripped Ramadevi Women’s University today after hundreds of students locked the main gate of the institution and later staged a road blockade in front of it demanding deferment of +2 1st year annual examination.

The students were objecting the commencement of the examination as per the scheduled fixed by the varsity authorities at an earlier date stating the non-completion of course as the reason.

Similarly, the agitating girls also objected the new attendance norm notified by the college authorities to sit in the exam alleging the decision couldn’t be taken at a short notice.

Some students also brought allegation of manhandling them against a male security personnel deployed at the college entrance, during the protest and blocked Janpath for hours by burning tyres.

The road blockade was later withdrawn by the girls.

Security tightened ahead of President Murmu’s visit to…