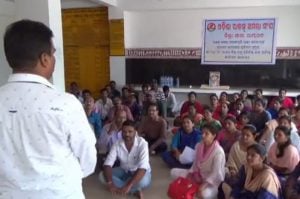 Rayagada: Administrative services in Rayagada district have come to a standstill for the last two weeks owing to the strike by members of the Odisha Rajaswa Amala Sangha (ORAS) since Aug 11.

People from 11 blocks of the district are bearing the brunt of the strike which has pension and Indira Awas Yojana related work to a complete halt.

Among the demands of the ORAS are raising the minimum educational qualification for appointment to revenue service from intermediate to graduation, salary hike as per the 2008 pay fixation, withdrawal of the new pension rules mentioned in the Pension Fund Bill of 2005 and implementation of old pension rules.

A despondent Sudam Palka from Pitamahal village has been running to the office daily to get his pension cleared but in vain.

The Association has warned if the government doesn’t pay heed to their demands, then members would boycott office from Aug 27 onwards.