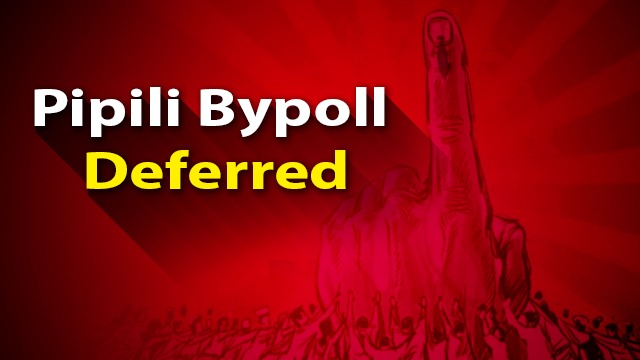 Bhubaneswar: The upcoming bye-election in Pipili of Odisha has been deferred due to surge in Covid 19 cases. The Election Commission of India on Monday issued a directive where it has been said that by polls in three Assembly Constituencies have been deferred.

As per the letter, the bye-elections that were scheduled to be held on May 15 in Pipili of Odisha and Jangipur and Samserganj of West Bengal were deferred due to surge in Covid 19 cases.

“Commission after taking all material facts and inputs of CEO West Bengal and CEO Odisha in consideration and taking note of lockdown/ restrictions under Disaster Management Act, 2005, as issued by NDMA/ SDMA has decided to defer the scheduled poll and extend the period of elections in 110-Pipili AC of Odisha and 58-Jangipur and 56-Samserganj Assembly Constituencies of West Bengal. Fresh notification will be issued after assessing the pandemic situation,” the letter said.

The model code of conduct (MCC) in the above Assembly Constituencies was lifted which will be in operation from next date of notification.

Oxygen Production Plant And 20 Ventilators Arrive In India From Italy