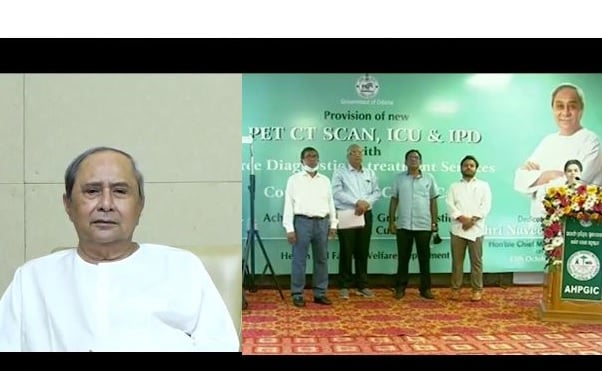 Joining the programme on virtual platform, Chief Minister Patnaik said that the PET-CT scan is considered as one of the central pillars in the management of cancer. The PET-CT scan facility is a first of its kind in a State Government hospital. Along with the LINAC machine, more facilities are also being developed for diagnosis and treatment, he added.

He also launched the new IPD and ICU facilities at the institute. With this, the number of beds at IPD is increased from 281 to 507, besides 20 beds in ICU.

The Chief Minister said that these facilities will be immensely helpful in boosting cancer care and management at AHPGI. This will certainly bring a huge relief for the patients, he added.

Saying that Cancer takes a protracted period of treatment procedures, he called upon the doctors and paramedical staff to treat patients with empathy and create confidence in them.

He said that Acharya Harihar Post Graduate Institute of Cancer is a premier institute of education, research and treatment for cancer. He added that the state government is committed to transform it into one of the best cancer care institutes in the country.

Highlighting on further development of AHPGIC, he said that the government has included its further expansion under the SCB redevelopment plan.  A new OT complex, OPD, Pathology, academic area and resident hostels will also be developed under this plan.

Speaking on govt’s initiatives in cancer care in state, he said that in order to strengthen cancer care in the state, his government has approved cancer care unit in ten districts.   Besides, we have already initiated steps to set up specialised cancer hospitals at Bargarh and Jharsuguda. We have also set up palliative care centres at district level, he added.

He hoped that these steps will help in making Odisha a hub of cancer care in the eastern region of the country.

Health Minister Naba Das outlined the CM’s vision of a healthy and happy Odisha and how the state is implementing his vision by bringing in new technologies and infrastructures in health care. As a mark of respect, reflecting the CM’s commitment and vision to improve healthcare services in the state, he appealed all to turn up in huge numbers to donate blood on his birth anniversary on October 16.