Earns praises from devotees and environmentalists 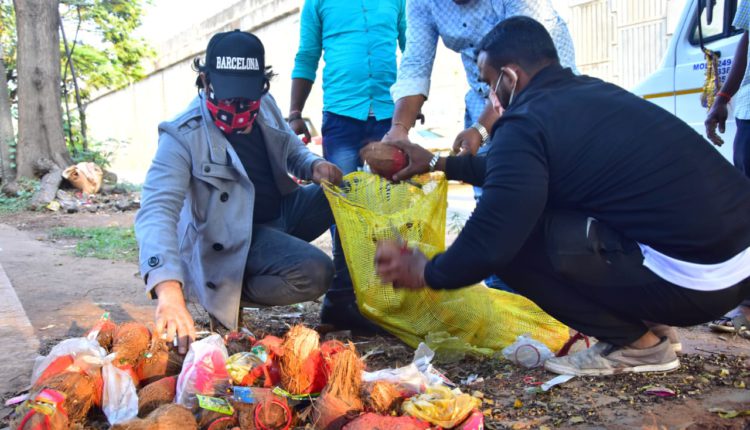 Bhubaneswar: Even as Odia film actor Sabyasachi Mishra has turned a messiah for thousands of helpless people during the coronavirus-induced lockdowns, he won the hearts of the people yet again. This time, he earned praises from devotees and environmentalists by sending thousands of coconuts lying on roadsides to Maa Tarini shrine in Ghatgaon of Keonjhar district.

These coconuts offered by devotees in the name of the deity for fulfilment of their wishes have been gathered on roadsides and bus-stands in various places for over the last six months. Usually, bus drivers transport these coconuts to Ghatgaon daily. However, due to the Covid-19 pandemic, they were reluctant to touch the coconuts in fear of infection. These piled up coconuts not only created civic problems and harmed the environment, but the devotees were also hurt emotionally. On Sabyasachi’s initiatives, these coconuts piled up at several places including Baramunda, Fire Stataion Square, CRP Square, Acharya Vihar, Vani Vihar and Rasulgarh, of Bhubaneswar and other places like Cuttack, Chandikhol and Panikoili were loaded in trucks and sent to Maa Tarini’s shrine at Ghatgaon.

A joyful Sabyasachi said he is happy to be a medium to send the prayers of devotees to the deity. He also urged the denizens to keep their towns and cities clean.