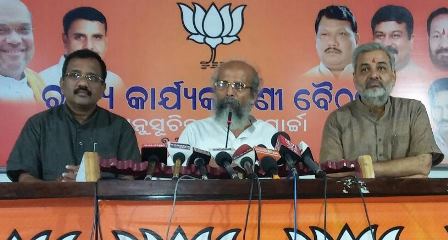 Bhubaneswar: Odisha BJP on Saturday made a scathing attack on the Naveen Patnaik-led Odisha government saying it had ruined the education system in the state for the last 17 years.

The saffron party alleged that the BJD government had failed massively in providing quality education to the students, due to which the future of the students, mostly poor, is dark.

The BJP has asked the ruling party to explain the alleged poor education system to the people during its ongoing padyatra.

At a press meet at the party’s headquarters here today, senior BJP leader Pratap Sarangi alleged that the state government had failed in providing class rooms and teachers for each class in both primary and secondary schools across the state.

The saffron party leader complained that seven percent of the schools are being run by a single teacher and there is one teacher less in 66% government primary school for 30 students.

The saffron party leader also claimed that the state government had done injustice to the teachers by categorizing them in different groups and paying them differently for the same work.