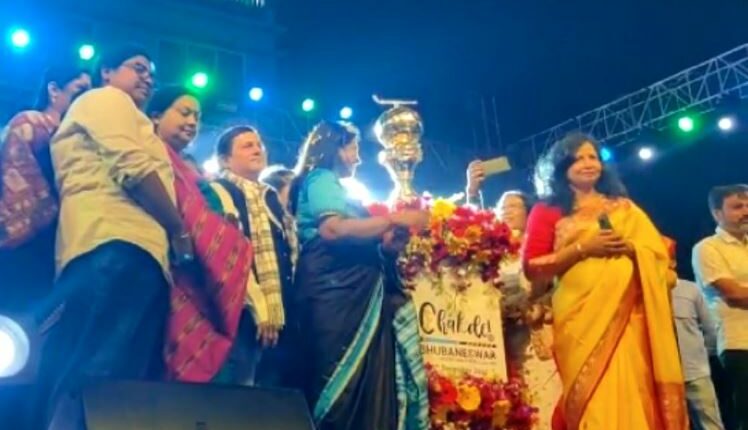 Bhubaneshwar: While preparation for the upcoming Hockey World Cup is going on full-fledged in the State after a successful nationwide tour, the prestigious trophy for the FIH Odisha Hockey Men’s World Cup 2023 Bhubaneswar-Rourkela made its way back to Odisha on Sunday.

The Cup was welcomed at different places of the capital city while KISS and KIIT welcomed the trophy in a special manner amid participation of thousands of students.

After the cup reached Bhubaneswar Airport it was welcomed amid dance and music. Later it was taken near the famous Lingaraj temple where a group of priests from Puri chanted mantras.

The Cup was welcomed at KIIT University where students showered flowers on the cup amid dance and music.

The trophy will now go on a state-wide tour of Odisha over the next three weeks and will travel around 30 districts.

The magnificent trophy tour kicked off on December 5 with Odisha Chief Minister Naveen Patnaik presenting the trophy to Hockey India President Dilip Tirkey in Bhubaneswar. The trophy travelled across 13 states and one Union Territory, including the national capital, New Delhi, over the last three weeks.

Throughout the nationwide tour, the fans gathered in large numbers to witness the unveiling of the trophy at each venue. And gracing the august occasions were Indian hockey legends and respective state ministers.

In the national capital, Union Minister of Sports, Youth Affairs, and Minister of Information and Broadcasting Anurag Thakur graced the occasion and wished the Indian men’s hockey team the very best for the FIH Men’s World Cup 2023 Bhubaneswar-Rourkela, the Hockey India informed in a release on Sunday.

Addressing the event marking the end of the Trophy Tour, Odisha CM Naveen Patnaik, said, “We congratulate Hockey India for their tremendous efforts in organising the nationwide trophy tour on such a large scale. It was a delight to witness such massive support shown by the fans of our beloved sport all across the country. Hockey has always been one of the most beloved sports among the people of Odisha, and it is our great pleasure and honour to offer the fans a chance to get a glimpse of the trophy, before the start of the tournament. We are confident that the FIH Odisha Hockey Men’s World Cup 2023 Bhubaneswar-Rourkela will be an unforgettable spectacle.”

Dr Dilip Tirkey, Hockey India President, said, “We are delighted with the tremendous response that we have received for the trophy tour. Across each state, we honoured our legends of the sport who were thrilled to be a part of the campaign. We express our deepest gratitude to them for their participation.

“We also want to thank the state ministers and officials without whose support the trophy tour would not have been possible. Now, we are excited to embark upon the final leg of the tour across Odisha to give the fans in the state a chance to get a glimpse of the coveted trophy before the start of the tournament,” he was quoted as saying in the release.

The FIH Odisha Hockey Men’s World Cup 2023 Bhubaneswar-Rourkela will begin on January 13, 2022. Hosts India, who are placed in Pool D, along with Spain, England, and Wales, opening their campaign against Spain on January 13 as well.

Besides hosts India, Australia, Belgium, Netherlands, Argentina, Germany, New Zealand, England, France, Korea, Malaysia, Spain, South Africa, Japan, Chile, and Wales are the other 15 teams that will be competing in the tournament.

Twitter not going to bankrupt, but isn’t secure yet: Musk