Ganja Worth More Than Rs 2 Crore Seized In Malkangiri 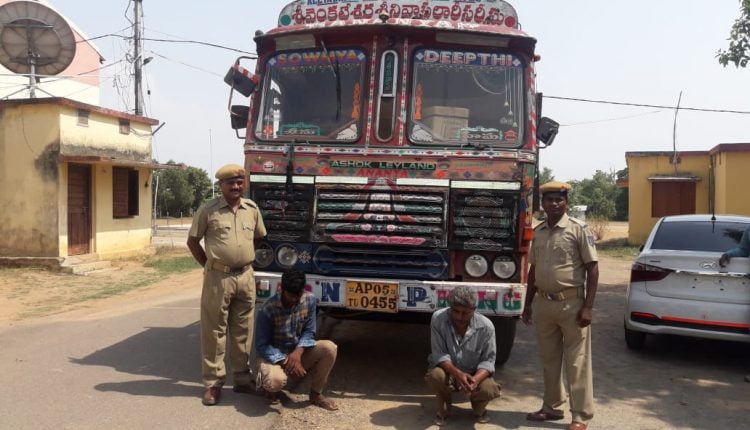 Malkangiri: In a major success police have seized ganja weighing 2160 kilograms in two separate cases in the district on Monday evening. Police said that the market value of the seized ganja would be more than Rs 2 crore.

In the first incident, Chitrakonda police chased a truck during patrolling and seized 1860 kilograms of ganja. Police have also arrested two accused identified as Gowriswar Rao (50) and Gollapalli Kumar (22), both residents of Andhra Pradesh.

“Both the accused claimed that the ganja was being transported to Nagpur from Darakonda area in Andhra Pradesh. We are further trying to ascertain the involvement of others in the racket,” said Chitrakonda SDPO, Manas Ranjan Barik.

In the second incident, Orkel police seized 300 kilograms of ganja from a Bolero vehicle and arrested two persons. Both the accused have been identified as Sahadeb Bairagi (27) and Sukra Hantal (40), both residents of Malkangiri district. Police said that the accused were transporting the ganja from Chitrakonda to Raipur in Chhattisgarh.

Police said that ganja is mainly cultivated in districts such as Angul, Sambalpur, Boudh, Kandhamal, Malkangiri and Rayagada. Ganja grown in Southern districts most often is smuggled to Bengal and Bihar through Bhubaneswar. Malkangiri police have seized ganja weighing more than 17000 kilograms in 2018.

Police said that ganja cultivation is the biggest source of income for Maoists and money generated through hemp cultivation is used in various violent activities. The Maoists have been encouraging forest dwellers to grow cannabis in forestlands and have also been providing them protection.

Police have also been taking the help of satellite images in inaccessible and interior areas on Maoist affected districts such as Kandhamal, Boudh, Rayagada, Malkangiri and Koraput to destroy ganja cultivation.