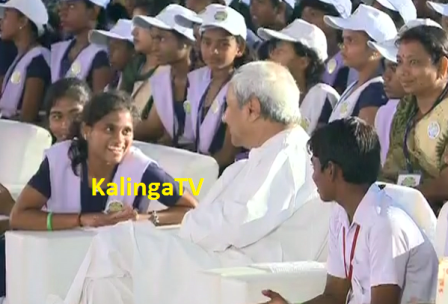 CM promises to be ‘Secret Santa’ for Children Bhubaneswar: It was a special day for Priyanka Soren of Siripur Saraswati Vidya Mandir, who not only got a chance to witness the State Level Children’s Day program live in Bhubaneswar, but also felt honoured to sit next to Chief Minister Naveen Patnaik throughout the event.

As obvious, half way through the programme, Priyanka, excited since morning, took a chance to speak to the Chief Minister directly.

“I felt privileged to sit next to him. I first asked him how he was and enquired whether he liked the show or not. Then I asked him what plans he had for us and our education system. He told us he had planned a lot for our benefit and wants to keep it a secret and reveal eventually,” Priyanka said.

“My friends and I are very happy to attend today’s programme. As young mass, we pledge to support for a better Odisha,” she said.

Man critical in attack by neighbour