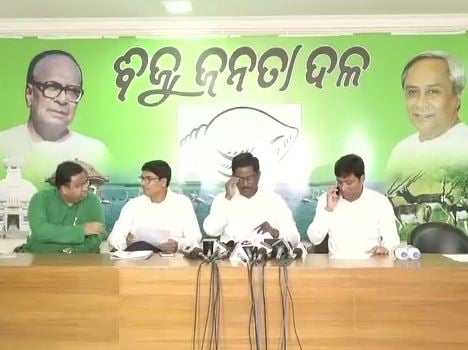 Bhubaneswar: Protesting the crash crunch at banks and drying up of ATMs in a post demonetisation scenario, the ruling BJD party would stage a two-hour silent protest across the state on Saturday.

Informing about the protest at a press conference in the city today, which was also attended by party leaders like Arun Sahoo, Sasmit Patro and some other leaders, BJD General Secretary Sajay Dasburma said the protest would be held from 10 AM to 12 noon. BJD leaders along with its youth, student and women wing members would take part in the protest which would be held in front of RBI Headquarters in Bhubaneswar and all nationalised banks in sub-divisions and blocks across the State.

Dasburma has claimed that the ATMs of almost all banks in the state have witnessed a shortage of cash over past 15 days and the situation has aroused out of the shortfall of currency notes due to demonetisation. Prime Minister Narendra Modi has also been apprised of the paralysis of as many as 2,21,700 ATMs across the country till April 16 during a meeting recently.

“Our purpose is to make people aware of the issue and we don’t intend to affect the functioning of the banks. Party members would resort to picketing in front of banks during the protest,” he added.