Asian Athletics: No medals for Odia athletes in 200m 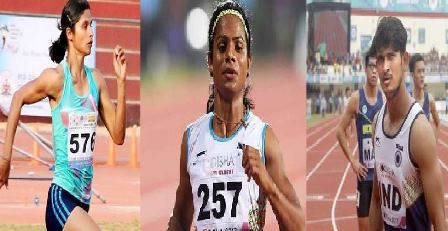 Bhubaneswar: In a big disappointment for the enthusiastic audience in Kalinga Stadium, ace Odia sprinters Srabani Nanda, Dutee Chand and Amiya Mallick lost in the medal round of the 200 metres women and men sprint events on the last day of the 22nd Asian Athletics Championships (AAC) here today.

Dutee and Srabani ranked fourth and fifth respectively in the final of the women’s 200 metres sprint event.

“I was a bit nervous before beginning the race and the weather condition also slightly affected my performance,” said Dutee, who clocked better timing than Srabani, who is a regular sprinter in the 200m category.

“The weather condition was fine and everything was okay. But it was not my day,” said Srabani.

Similarly, Amiya’s last medal dream fell flat as he ranked seventh in the men’s 200 metres sprint event. He clocked 21.03 seconds, his best timing ever. He was disqualified in Men’s 100m qualifying round and 4x100m finals.