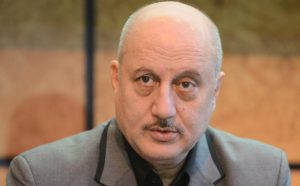 Pune: Versatile actor Anupam Kher has been appointed as the new Chairman of the Film and Television Institute of India (FTII) here . He replaces Gajendra Chauhan, whose tenure ended in March this year.

In 2015, the appointment of Gajendra Chauhan as the FTII Chief had led to a huge furore as the students of the institution staged an indefinite strike that went on for 139 days protesting his appointment.

The 62-year-old Kher was conferred the Padma Shri in 2004 and the Padma Bhushan in 2016 by the government of India.  Some of his prominent films include Saaransh, Daddy, Lamhe, Dilwale Dulhaniya Le Jayenge, Maine Gandhi Ko Nahi Maara, Khosla Ka Ghosla and A Wednesday.

Kher has also been part of critically acclaimed international films like Bend It Like Beckham, Golden Lion-winning Lust, and Oscar-winning Silver Linings Playbook.

Kher had also served as the Chairman of the Central Board of Film Certification and the National School of Drama.