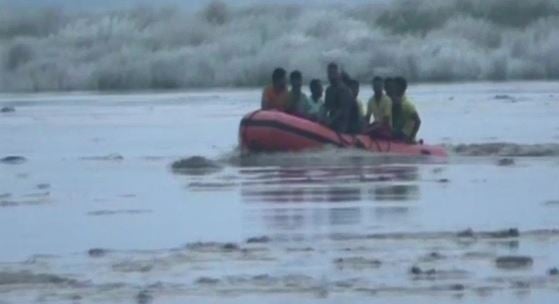 Banki: Four cattle herders were stranded in the middle of the river Mahanadi following a sudden rise in the water level in Banki area were rescued by the fire personnel.

The four herders were the residents of Ratagada Panchayat of Banki block.

Sources say, the cattle herders had gone for grazing in the morning hours, when they got stranded due to sudden rise in the water level in Mahanadi river.

Some villagers spotted them and informed the Banki fire personnel at around 11 am. On being informed, the fire officials reached and managed to rescue them from the middle of the river.

Some cattle were swept away in the strong currents of the water. The villagers alleged that they had informed the fire personnel department at around 11 am, but they reached at 4 pm.

Also Read: Four killed, one missing due to heavy rain in Odisha