Bhubaneswar/ Mayurbhanj: As many as three people out of the total 9 persons are said to be critical as they sustained injury in two separate road accidents that took place in Bhubaneswar and Mayurbhanj on Saturday in Odisha.

In the first case, 5 people including driver of ‘Dulhan’ passenger bus sustained injury as the bus met an accident after having a head-on collision with a truck at Rajabasa chhaka under Bisoi police limits on NH 49 in Mayurbhanj district of Odisha. 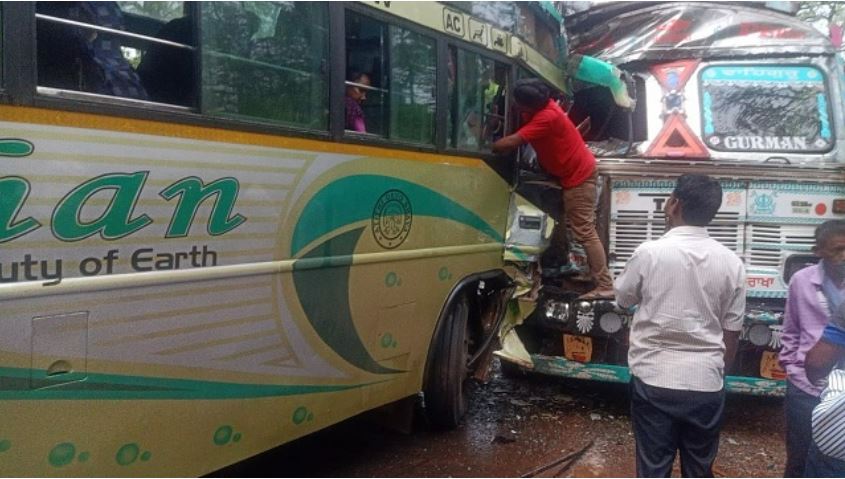 Driver of the bus is said to be critical as he was trapped for long time following the accident and later rescued. After getting information police personnel from Bisoi Police station rescued the passengers with the help of locals. All the injured persons were then rushed to Bisoi hospital for treatement. However, as his condition deteriorated the driver was shifted to Rairangpur sub divisional hospital in an ambulance.

Dulhan bus was on its way to Suleipat from Baripada when it met the accident with the truck that was coming from the opposite side..  Police have seized the two vehicles.

In another incident in the capital city, a car rammed a tiffin stall after going break fail. As many as 4 persons injured in the mishap out of which 2 are said to be serious. As per reports, people were consuming food inside the tiffin stall that is at 100 meters from the Jagannath temple of Shailashree Vihar when a blue coloured car rammed the kiosk after going break fail. The mishap took place at about 2 pm on Saturday. As a result 4 persons sustained injury out of which 2 people are said to be critical.

One of these two serious persons has been identified as Yudhisthir Behera of Damodarpur in Ganjam district. He is an engineer. The other person’s identity is yet to be received.