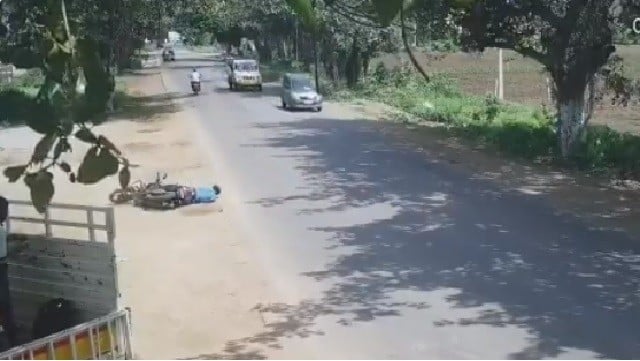 The video shows an intoxicated biker ridding on the road unstably with his helmet hanging on from the mirror.

The man is clearly under the influence of alcohol as he falls down on the side of the road when one bike zooms past him.

The man, can be seen unable to ride in a straight line.

He struggles to stand up after falling as the bike falls on him. A couple passing by see his struggle and stops to help the man.

They help the drunk man get up. He then gets on his bike with and drives off into the traffic.

But he is unable to drive the bike in a strait line and keeps driving in a zig-zag manner.

Watch: Scary video of Leopard attacking woman in her…

This disturbs the other vehicles on the road and the other drivers are forced to slow down their vehicle in fear of hitting him.

But he could not keep driving for long as the video shows him hitting a car and falling down again.

The incident happened near the Ibrahimpally Gate in Chevella.

The Cyberabad Traffic Police shared the video in order to urge people not to drink and drive.

The video has already been viewed over 1,69,300 times and garnered 700 shares on Facebook. The video also warns “Don’t drive under the influence of alcohol” at the end.

Actress Shruti Haasan opens up about her mental health