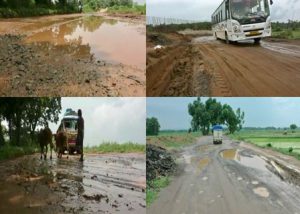 Athagarh: The tardy progress of the widening of the Khuntuni-Narasinghpur stretch of State Highway No. 65 has made commuting on it a nightmare for tens of thousands of residents of Athagarh sub-division.

Chief Minister Naveen Patnaik laid the foundation for the road construction project in 2014 with the promise of better communication. But three years down the line, it has ended up making life even more difficult for the people than it already was.

Reports say construction work on SH 65, which remains the sole communication line for the residents of Athagarh, Tigiria, Badamba, Narasinghpur and Khuntuni areas of Cuttack district, has been badly affected by the administrative logjam since the Gujarat based construction company Sadbhav Engineering Limited left the road widening work midway in 2016 after working for two years. The state Works Department later handed over the project to another construction agency: Mass Infrastructure Pvt Ltd of Baroda.

But nothing has changed since the Baroda based company took over the work. Accidents have become a regular phenomenon on this SH due to the wretched condition of the road. One can witness mounds of concrete mixtures left idle on this road by construction workers making life difficult for the commuters. Numerous potholes and fissures on the road makes it a virtual death trap for even for those drive on this road with utmost caution.

Locals in the area have claimed that the construction agency Mass Infrastructure has also left the work and a local agency RKD Construction has taken over the project. But due to political interference, the project work is moving at a very slow pace.

However, when Kalinga TV contacted Athagarh sub-collector over the issue, he dubbed all such speculation as baseless and said construction work could resume only after the Monsoon season ends.

Notably, the 80 kilometer long SH 65 widening work was undertaken at a project cost of Rs 140cr. As a part of the project, 1 8 new culverts would be erected on this road and 165 already existing culverts would be reconstructed. Similarly, 11 other culverts existing along the road would be widened to make room for the new road.