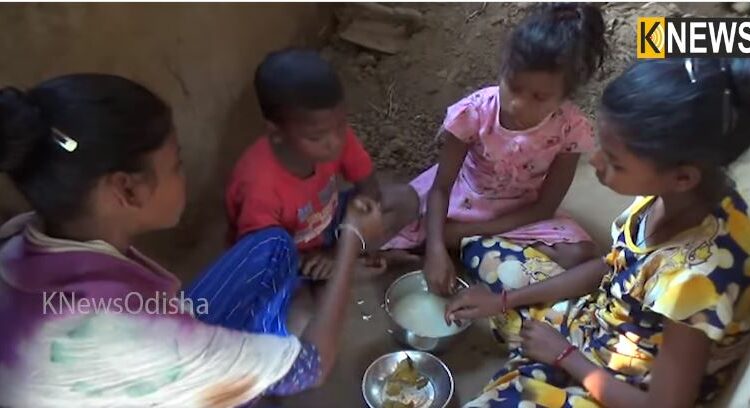 Khordha: Four orphan kids from Khordha district of Odisha has been struggling for the last six years for food. After death of their parents in 2016 in a fire accident, they are struggling to arrange two times’ meal for the day while so far they have not got any government help. After knowing their ordeal Kalinga TV reporter Durga Prasad Das recently met the kids at their hut in the Adivasi Sahi of Nilakanthapur under Podadiha panchayat of Begunia block in Khordha district. A report.

While the four orphan kids are expecting help for the last 6 years following demise of their parents, the villagers have been providing them food as per their capacity.

Six years ago in an unfortunate night the family was sleeping. The four kids had slept at one place. In the night their house caught fire from the lamp in which their father and mother Veerat Nayak and his wife Pratima were charred to death. Then, bad days started for these children. While they struggled for food the villagers are providing some food to them.

Now the eldest of the four orphan kids is 15 year old. She is somehow taking care of the family as per her capacity. She works in others’ house to wash the utensils and at times works in the paddy field to reap the crop. She left academic studies after Class X while the second eldest daughter abandoned studies after Class VII. The younger two kids are studying in the village school. Actually they have registered them to the school because of midday meal. Since the four children are at the mercy of the villagers, they are eating whatever is given by the villagers. So, getting to eat the midday meal is a big thing for these kids and hence they have enrolled their names.

Following the fire mishap the kids’ paternal uncle and aunty took their responsibility, but since they are also very poor they could not do much.

The four kids are living in a house, which can collapse anytime. The villagers have informed about the kids to government officials several times but nobody has taken any steps for them so far. Since none of the kids have attained a major age, they have not been given any benefit under any government scheme. Hence, they are begging now in the village.

To know what government help has been provide to the kids, our reporter met the BDO. He denied to give any statement in front of the camera. Perhaps because nothing has been done for these kids for the last 6 years, he had nothing to inform. However, he has assured that he will meet the kids and will make arrangement for them. It is time now to wait and watch when he is taking time to meet the orphan kids.

These children need help. Readers are requested to help out these children by visiting to their village because they do not have any bank accounts.

Address: Adivasi Sahi of Nilakanthapur under Podadiha panchayat of Begunia block in Khordha district of Odisha.