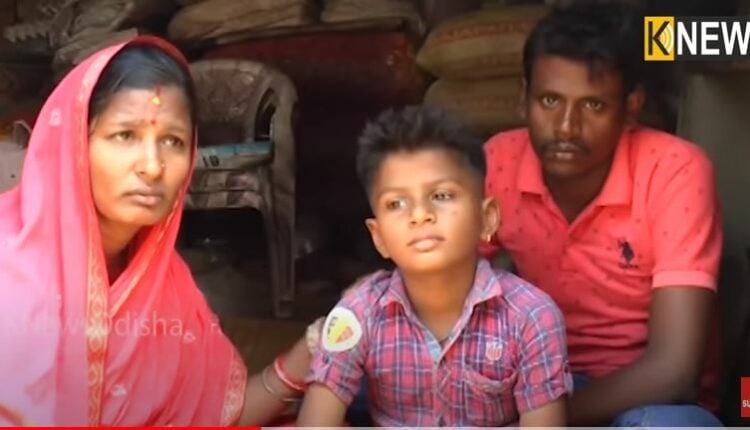 Jajpur: An eight year old boy is suffering from kidney ailment and thus his family has sought help for his treatment. The family belongs to Jenapur Station Bazar under Dharmasala block of Jajpur district in Odisha.

The boy has been identified as Aditya, son of Rajesh, a daily wage labourer. Aditya was studying in Class III when initially he felt pain in his lower abdomen. He vomited a lot and defecated black stool. Hence, his father took him to Jajpur and visited the hospital. The doctor advised him to shift the boy to Cuttack Sishu Bhawan. Accordingly he was taken to Sishu Bhawan where it was found that Aditya has been suffering from kidney ailments.

Since then, Aditya has discontinued academic studies since the doctor advised him not to roam here and there. In fact, the doctor has asked not to even walk.

The doctor has assured that Aditya will recover by regular use of medicines, yet his parents are not financially sound to carry out treatment of their son for which Rs 15 thousand to Rs 17 thousand needed. They have sold all the items of the house that could earn some money for the treatment but still more money is required.

The doctor has advised him not to roam or play. Hence he has discontinued studies. His father neither can go to work nor can leave the boy at home. The locals have given some money for the treatment but that is very less and more money is needed. The District health department has been informed in this connection.

Under these circumstances the family has sought help from Government of Odisha, Central government as well as private individuals for financial help. If anyone wants to donate money to the family here is the details.

2023 BMW S 1000 RR unveiled ahead of its launch in India, to offer more power than its predecessor

Transformation in Education is not a dream anymore, it’s a reality now: Odisha CM