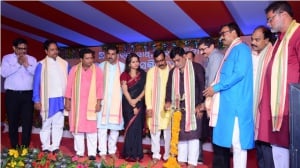 Bhanjanagar: Claiming that the Narendra Modi government had placed Odisha at the centre of its welfare schemes for the poor, Union Minister of State for Rural Development Ram Kripal Yadav today urged the people of the state to strengthen the hands of the Prime Minister.

Addressing a function organised by Hindustan Petroleum Corporation Ltd. (HPCL), a PSU under Ministry of Petroleum and Natural Gas, here as part of the series of programmes on completion of three years of the Modi Government, Yadav presented the government’s three-year report card and listed several achievements on the social and economic fronts.

The provision of Rs Rs. 70,000 for the poor to build pucca houses has now been increased by Rs. 1.3 lakh to facilitate the construction of toilets, he said.

Asserting that farmers were crucial to his vision of a new India where no area will remain undeveloped, the minister said the measures taken by the Union government would help double farmers’ incomes would double by 2022. ‘One Nation, One Market’ would  ensure a prosperous Farmer for a prosperous India, he said.

He said 90 lakh Indians had come forward to disclose their income and pay tax as a result of demonetization, a major step in the battle against black money.

The programme was started with welcome address by Dy. General Manager of HPCL, and ended with a vote of thanks by Sr. Regional Manger of HPCL.