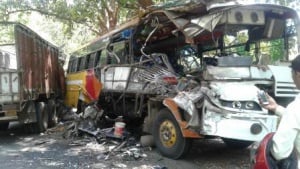 Sambalpur: A 36-year old woman was killed and more than 30 others were injured in an accident near Hindol ghati under Rairakhol police limits in Sambalpur district on Friday.

The accident took place when a private bus named Pradhan carrying passengers to Angul from Sambalpur collided head-on with a speeding truck, killing the woman and injuring others.

All the injured persons were rushed to Rairakhol hospital for treatment. Later, five of them were shifted to Burla hospital as their condition deteriorated.

Meanwhile, the body of the deceased woman, identified as Smita Sahoo of Handapa village, has been sent for post-mortem.

Rairakhol police have begun an investigation into the incident.