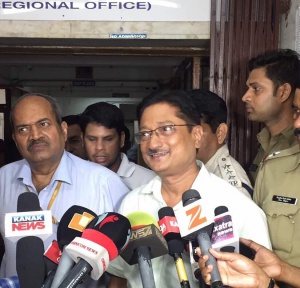 Bhubaneswar: A two- member team from the Central Board of Secondary Education (CBSE), led by a Deputy Secretary, arrived here on Wednesday amid strong protest to probe the discrepancies in the results of the class XII examination conducted by the Board. .

Controller of examination KK Choudhary and deputy secretary DK Goyal of the CBSE headquarters arrived in the city to discuss the issue with tBoard officials here.

Assistant secretary of CBSE Jagabandhu Pradhan informed that the issue will be resolved in two weeks.

On the other hand, the protests outside the CBSE office gathered further momentum today with students’ wings of political parties coming out in support of the agitating students and their parents.

Biju Chhatra Janata Dal and Student Congress members joined the agitation and clashed with the police, when the latter barred them from barging into the CBSsE office.

Chief Minister Naveen Patnaik had written to the HRD Minister on Monday requesting him to look into the matter as thousands of students have had their results withheld while there have been serious discrepancies in the marks given to many more.