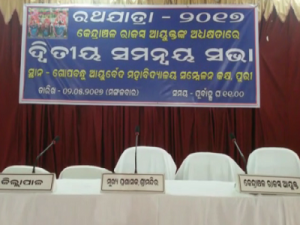 The second coordination committee meeting for the forthcoming Rath Yatra will be held in Puri on Tuesday.

The meeting will be held under the chairmanship of RDC A B Ota (Central Range) at the premises of Gopabandhu Ayurved College at around 11 AM.

According to sources, discussions will be held on different issues like construction of chariots, health, sanitation, roads, sewerage, drinking water, traffic management and electricity.

This apart, discussions on the progress of works decided in the first coordination meeting will also be held.

On the other hand, protesting the suspension of some fellow servitors due to chaos during Niladri Bije rituals last year, the Shree Jagannath Sevayat Sammilani, through posters has urged the servitors’ community to skip the meeting. The posters were found at several places near the temple. The servitors also did not attend the first meeting held last month.