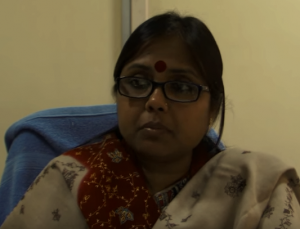 Amidst the political slug-fest between BJP and BJD over the issue of atrocities on Parbati Sasmal, who had petitioned PM Modi with a letter during the latter’s road show in Bhubaneswar on April 15, NCW Member Sushma Sahu arrived in Bhubaneswar today. She is accompanied by legal technical expert Geeta Rathee Singh.

The BJP delegation had met National Commission for Women (NCW) member Sushma Sahu in New Delhi and requested her to look into the matter, saying she was assaulted by the goons affiliated to ruling Biju Janata Dal (BJD) for daring to raise the issue before the PM.

Sushma Sahu, who arrived in Bhubaneswar today, will spend the time in the capital city before proceeding to Erasama tomorrow. She will meet the victim Parbati Sasmal and her family members as well as the neighbours to get a clear picture of the situation.

She will later hold discussion with the local police before returning to Bhubaneswar, where she is supposed to meet the SP and then DGP KB Singh. She will depart for Delhi on Friday.