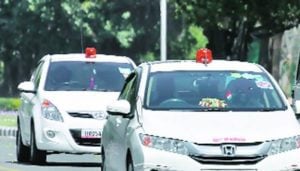 In a bid to abolish the VVIP and VIP culture in the country, the Union Cabinet on Wednesday put a ban on the use of red beacon vehicles by all key people, including President, Vice President, PM, CJI, Union Ministers, Chief Ministers, State Ministers, Judges of High Court and Supreme Court and Bureaucrats.

According to reports, the Union Cabinet which met under the leadership of Prime Minister Narendra Modi, decided to ban the red beacon vehicles to the VVIPs and VIPs from May 1, 2017. Only emergency services would be allowed to use the red beacon.

Earlier the Supreme Court had also restricted the unrestrained use of red beacons as a symbol of VIP culture and said that the vehicles fitted with red beacons will be allowed only for constitutional authorities and limited classes of high functionary.