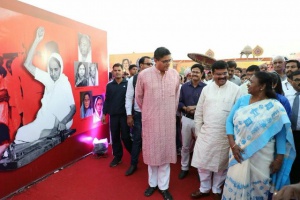 Kendrapara MP Baijayant ‘Jay’ Panda inches closer to the BJP further, as he became the only non-BJP leader to be invited to the three-day-long extravaganza ‘Odisha Parba’, which was held in New Delhi from April 29 till May 1.

Although the event was organised by a Delhi-based socio-cultural organisation Odia Samaja, it was reportedly sponsored by the BJP. Starting from Union Ministers Arun Jaitley and M Venkaiah Naidu to Dharmendra Pradhan, Jual Oram and Dr. Sambit Patra, all BJP leaders were part and parcel of the event.

Even, several BJP leaders from Odisha such as Ashok Sahu and Lekhashree Samantasinghar as well as loyalists of Dharmendra Pradhan in Odisha and Delhi were seen dominating the event. Neither the Chief Minister of Odisha nor any Ministers or MPs, including State Tourism Minister Ashok Panda were invited to the festival held on ‘Theme Odisha’.

While no BJD and Congress leaders were invited to the event, only Baijayant Panda was seen attending the program on the concluding day and having a good time with Dharmendra Pradhan. It raised further political speculations in the State.

Jay Panda along with Bhartruhari Mahatab is seen as getting closer to BJP in the recent months. It won’t be a surprise if both of them taking a plunge sooner than expected.