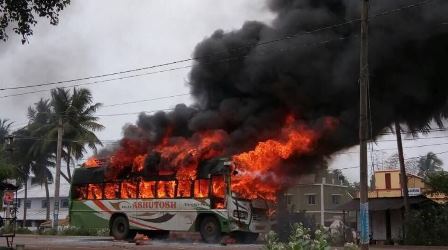 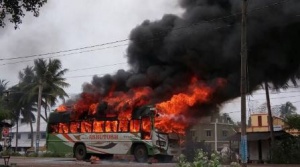 Puri: Irate locals set four buses on fire after a couple died in an accident at Hata Chhak under Pipili police limits in Puri district on Monday.

The deceased has been identified as Hadu Khan and his wife Kuni Bibi.

The duo was killed on the spot after a private bus (OR-02-Z-6159) ran over them while they were traveling on a Luna moped.

Locals gathered on the spot soon after the incident and set ablaze the bus and three other buses, which had reached the site by the time the accident took place. However, all passengers had got down from the buses when they were set afire.

Palpable tension still prevails in the area as locals have staged a road blockade on the Puri-Bhubaneswar road. Many vehicles, including passenger buses were stranded on the route.