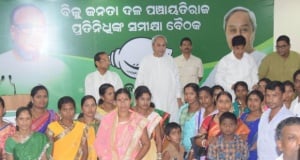 BJD supremo and Chief Minister Naveen Patnaik on Tuesday met the PRI representatives of Jharsuguda and Nabarangpur districts as part of his review meeting with the reps of all 30 districts in the State aftermath Pancahyat polls.

Patnaik met the local leaders of the two districts at the party headquarters office in Bhubaneswar in the presence of BJD Vice-President Surjya Narayan Patro and MLAs of the districts.

The grass-root leaders brought the issues, due to which BJD had to face massive setback in the rural election, before Naveen. Later, the Chief Minister urged them to work hard to win the trust of the people and strengthen the base of the party at the booth level.