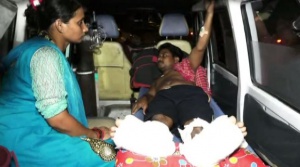 Cuttack: An attempt to murder case has been filed against eight Junior Doctors of SCB Medical College and Hospital for allegedly assaulting a patient’s attendants on Monday.

Speaking to reporters, Cuttack DCP Sanjeev Arora said that details of the doctors against whom the complaint has been lodged have been sought and stringent action will be taken against them, if they are found guilty.

One Kubera Chandra Ray of Gop in Puri district was admitted at the Orthopedics department of the government-run hospital. He was slated to undergo a surgery. However, a doctor reportedly refused to conduct the operation and asked him to vacate the bed. A war of word ensued between the doctors and relatives of the patient during which a group of junior doctors allegedly beat up three attendants – identified as Pradyumna Rout, Krushan Mohan Das and Kumudini Ray – after locking them up in a room.

Alarmed by the attack in the premier hospital, the kin have shifted the patient to another hospital.