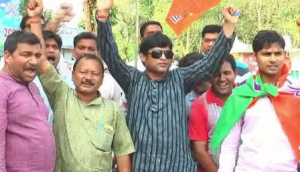 Sundargarh: Normal life was affected in Sundargarh district due to the 7-hour bandh called by BJP’s Odisha unit on Friday to protest egg hurling and stone pelting on Union Tribal Affairs Minister Jual Oram, allegedly by BJD and Congress activists, on June 14.

The bandh began at 6 am and would continue till 1 pm.

Vehicular transport, shops and other business establishments remained closed since morning. However, banks and hospital services are not affected as they were exempted from the bandh. The BJP activists have blocked roads by burning tyres and are picketing at various places across the district.

Meanwhile, more than fifty BJP workers have been detained in this regard.

Notably, Union Minister and Lok Sabha MP from Sundargarh Jual Oram was shown black flags and pelted with eggs and stones at his vehicle during his visit to Kendrapara district to attend BJP’s ‘Sabka Saath Sabka Vikas’ programme on June 14.