AAP Odisha to gherao Bolangir Collector’s Office on May 1 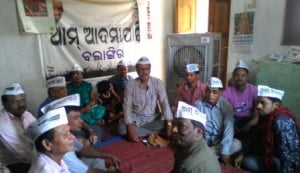 While the major political parties in Odisha are busy discussing the poll strategies for 2018 Civic Polls as well as 2019 Assembly/Lok Sabha elections, the Aam Aadmi Party (AAP) has decided to gherao the Bolangir Collector’s office on May 1, demanding reopening of Deogaon Sugar Mill, which has been lying defunct since June 2013.

In September 2013, the Odisha Government had decided to reopen the Sugar Mill and take control of the management, but it could not be materialised.

The Aam Aadmi Party had held a massive farmers’ rally in Bolangir on March 28, seeking reopening of Deogaon Sugar Mill. The rally was also addressed by national leaders Kapil Mishra and Raghav Chadha. The AAP claims that the Sugar Mill would generate 15,000 jobs once it starts functioning.

AAP Convener and Spokesperson in Bolangir District, Mr. Ajay Das has alleged that none of the leading political parties and their leaders, including AU Singhdeo, Narasingha Mishra and KV Singhdeo are showing any interest to raise this issue, but AAP trying its best to put pressure on the government for the sake of common people.