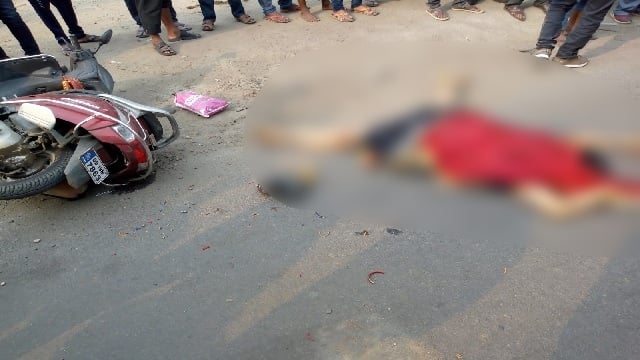 Angul: In a tragic incident, a woman was killed on the spot while her four year old son and husband sustained critical injury as a speeding truck hit their vehicle in Angul district of Odisha on Saturday. The accident took place in Turang village under Banrapal block of the district.

The deceased woman has been identified as 30 year old Lily Das and her husband is Ramesh Chandra Das (35) of College chowk area in Angul.

As per reports, the three persons were on their way to the place of the woman’s sister in Kandsar in Nalco area. They had parked the Scooty at Kaltax chowk when a speeding 14 wheeler truck hit the Scooty from rear side. Resultantly, the woman was killed on the spot while her son and husband sustained critical injury. The locals rushed the two to the District Headquarter Hospital.

Angul Police reached the spot and started investigation. Tension gripped the area following the accident. The locals have caught the driver of the truck and handed over him to Police. Police have detained the driver for interrogation.

Follow these simple steps to rectify information on your PAN card