Viral video: Watch how this girl gives bath to a pit of snakes fearlessly 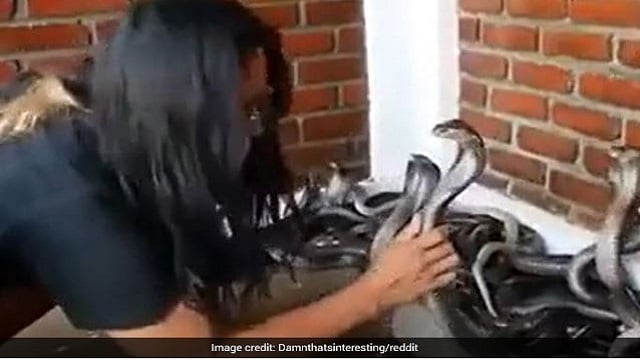 Petting snakes can be someone’s hobby, but when 10-20 snakes gather around you, there is no doubt that you will get panic. Especially, if it is a cobra snake, then everyone will get scared or frightened for sure. But a video is going viral on social media in which a girl is seen bathing a pit of snakes fearlessly.

The 42-second video has been shared on Reddit by Damnthatsinteresting. In this video, it is seen that a girl first pours a bucketful of water on the black snakes and then she is bathing the snakes on the water shower from the pipe.

At the end of the video, the girl is also seen shaking her head like a snake’s head with a snake in her hand. Anyone can stop breathing while watching the scary video.

Thousands of people have watched the video while hundreds of people have liked and given their comments on the video. “I think they’re scared and wondering how long before she makes them into hoses too,” wrote one user.

“These are spitting cobras. You can see them still trying to spit venom in her eyes but there’s no liquid coming out. She still has glasses on just in case,” wrote another user.