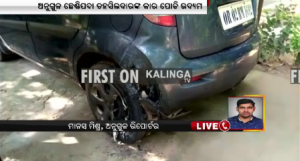 Angul: Putting a big question mark on the safety and security of government officials in the Chhendipada block, a sand mafia torched Tehsildar Pratap Pritimoy’s car after breaking into his government quarters here on Monday.

According to the Tehsildar, the accused Pappu, who operated as an authorised dealer of Finex, a private company holding sand tender in the block for the last one year, entered into his quarters at around 6.30 pm yesterday and torched the rear part of his Maruti Suzuki car after pouring petrol on it. Pappu ran away after being spotted by a staff of the Tehsildar while doing the act.

Pritimoy said he was receiving threat calls from officials of Finex company since he cancelled its lease. Since he also prevented Pappu from lifting sand and stone from the lease area, the attack of Monday could have been a fallout of that, suspected the Tehsildar.

Chhendipada Police is investigating the matter while the interrogation of the accused is on.