Sold Kendrapara girl child under treatment; to be restored to parents 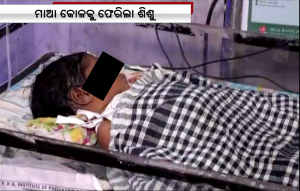 Cuttack: The four-day old girl child, who was sold to an unknown person by her parents, was rescued by the Kendrapara district administration on Friday evening.

Yesterday, the girl child was traced at Cuttack Sishu Bhawan, while getting treatment at the hospital, by the Kendrapara police. Her father Nirakar Maharana identified the baby girl and confirmed it during the police verification. The girl child is still at the Sishu Bhawan for treatment.

Nirakar and Geetanjali Maharana, residents of Righagarh village in Rajnagar block in Kendrapara district, were blessed with a baby girl at a private hospital in the district headquarter on August 1.

Disappointed with the birth of the girl child, the couple, who already have two daughters, sold their new born daughter for Rs 12,000 to a childless person from Charinangal village in Jajpur district.

The parents have now agreed to take the girl child back with them.

Geetanjali had earlier said that they decided to sell the new-born girl child due to poverty. However, her husband Nirakar denied selling the new born girl child;he said they voluntarily handed her over to a childless person.

Later, the couple complained that their village ASHA worker Arnnapurna Maharana, who accompanied them during the delivery, and an employee of the private hospital, forced them to sell their child.

After news of the child sale spread, the district administration, with the help of police, launched a special operation to trace the infant.