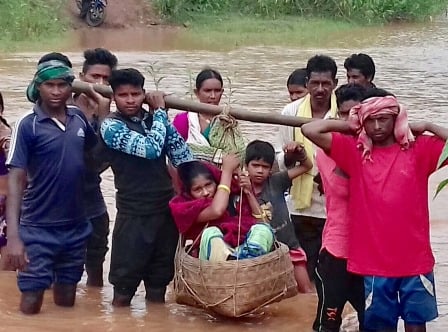 Koraput: In yet another incident highlights the poor state of health services provided by the state government, a woman who developed some post delivery complications was carried on a basket at G.Rautput village in Dasamantpur block of the district on Tuesday.

According to reports, the woman, identified as Sumitra Takri, was carried by her kin on a basket to cross the Thaberi river in a bid to reach the district headquarters hospital.

She was brought to the hospital the same way on June 23 and gave birth to a baby boy. She was discharged from the hospital on June 26. However, today she was carried to the hospital again when she complained of gynaec problems after the stitch was opened.