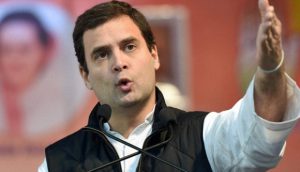 Berkeley: Congress Vice President Rahul Gandhi on Tuesday indicated that he would be the Prime Ministerial candidate of the Congress in the 2019 general polls.

Addressing a gathering at the University of California here on “India at 70”, Gandhi reflected on contemporary India and the path forward for the world’s largest democracy.

Asked if he was ready to be the Prime Ministerial candidate of the Congress party during a Questions & Answers session, Gandhi said, “I am absolutely ready to do that….We have an organisational party that decides that and that process is currently going on …That decision is something the Congress party would take at an appropriate time.”

Gandhi also spoke about ‘ahimsa’ or non-violence as the greatest strength of India.

The idea of ahimsa unites India's castes, religions &languages. An idea that Gandhi fashioned into a powerful but beautiful political weapon

In his speech, the Gandhi scion vehemently criticised the Narendra Modi Government for suppressing liberal voices across the country.

“The ruling BJP is spreading hatred, anger, violence and politics of polarisation,” Gandhi said while talking about the recent killing  of Kannada journalist Gauri Lankesh in Bengaluru and about mobs lynching people on suspicion of eating beef.

“It makes millions feel they have no future in their own country, isolates people and converts them to radicalization,” the Congress leader added.

Demonetisation and the hurried implementation of the goods and services tax (GST) had hit growth hard, he alleged.

“Note ban caused tremendous damage to the economy as it was taken without any discussion in the Parliament and keeping the chief economic adviser in the dark,” Gandhi said.

Gandhi, who is on a two-week visit to the US to interact with global thinkers, political leaders and overseas Indians, spoke on the political environment in the country, job creation and the effects of demonetisation among other issues.