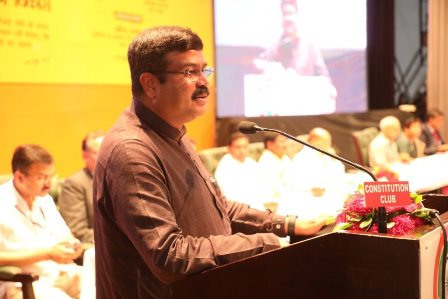 Bhubaneswar: Union Petroleum Minister Dharmendra Pradhan on Wednesday urged all Chief Ministers of the country to make land available to oil marketing companies (OMCs) at government rate for setting up of petrol pumps by people belonging to the SC/ST categories.

Pradhan claimed that the weaker sections of the society have been fooled for long by many leaders, who only preached but never acted. But the NDA government is doing its best for the development of SCs/STs as it considers it its constitutional duty.

“For the Narendra Modi Government, the Indian Constitution is the only guide for administration. Upliftment of SC/ST communities is a constitutional duty for us as they have been fooled for long by leaders who never walked the talk. The Modi Government has shown its commitment for Sabka Sath Sabka Vikas. Therefore, I have written to all the Chief Ministers of the country to allot land to set up SC/ST Petrol Pumps,” said the Union Minister while addressing a function to allot Petrol Pumps to SC/ST & Women Category Letter of Intent (LoI) Holders in New Delhi today.