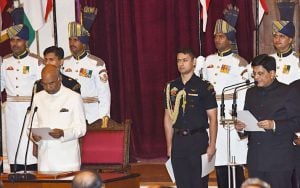 New Delhi: Piyush Goyal, the minister of state for Power, has taken over as the new Railways Minister replacing Suresh Prabhu on Sunday.

On August 23, Prabhu had offered to resign taking full moral responsibility for the recent spate of train accidents.

Goyal has a good track record in the power and coal ministry having managed to keep it scam-free and ushering in a turnaround in the sector.

But Goyal now has the unenviable task of turning around the Railways, which has been grappling with multiple problems including falling revenues, poor safety records and competition from budget airlines.

Earlier on Sunday, Prabhu had thanked his colleagues via a tweet.

Thanks to all 13 Lacs+ rail family for their support,love,goodwill.I will always cherish these memories with me.Wishing u all a great life