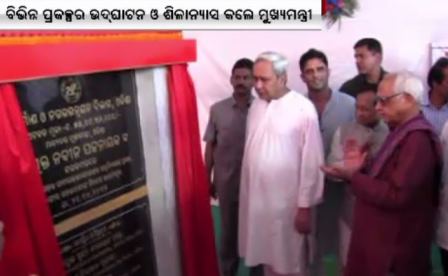 Balangir: Odisha Chief Minister Naveen Patnaik inaugurated and laid foundation stones for a number of welfare projects during his one-day visit to Balangir district on Saturday.

The Chief Minister first inaugurated a drinking water project near the Circuit House.  The project is likely to cater to the needs of the public here and solve the plaguing problem of drinking water supply.

Patnaik also dedicated a 125-bedded Maternal and Child Hospital (MCH) on the premises of the District Headquarters Hospital (DHH) to the people of the district and its periphery.

A high level bridge over Madhiapalli canal and a new building of Balangir Government College were other projects which the CM inaugurated today.

Patnaik laid foundation stones for a high level bridge over Ong river on Losinga- Bharasuja route and another bridge near Pandel. Later, he addressed the public at Koshal Kala Mandal venue before departing to Bhubaneswar.

Elaborate security arrangements were made in view of the CM’s official tour. Around 40 Congress and BJP activists’ workers were detained by the district police to avert any untoward incident.