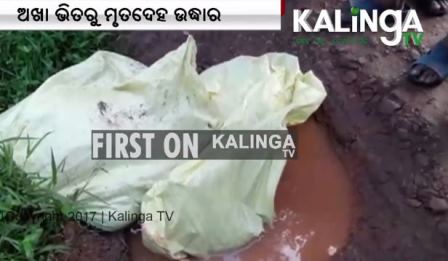 Kendrapara: The body of a newly married woman was found wrapped in a sack and thrown on the road at Sindula village of the district on Wednesday.

The deceased has been identified as Minati Mallick.

Some locals who found the body inside the sack this morning manhandled the father-in-law, mother-in-law and sister-in-law of the deceased suspecting their involvement in killing her as her husband Prakash Rout absconded after the incident.

On being informed, Marsaghai police reached the spot and seized the body for post-mortem. Police also detained Minati’s in-laws for interrogation. A case has been registered under Sections 302 of IPC.

According to sources, the deceased woman from Jajpur had married Prakash six months ago after they fell in love with each other while working in a private company in Bhubaneswar.

It is alleged that she was tortured and then killed by her in-laws over dowry demand. It is assumed that the woman was killed late on Tuesday night and the body was being taken to be disposed of, but was dumped on the road due to some unavoidable circumstances.