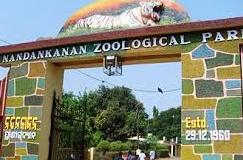 Nandankanan to get 18 species from Chennai

Bhubaneswar: The city-based Nandankanan zoological park will get 18 species from Arignar Anna Zoological Park in Chennai in exchange of 19 animals.

According to the authorities of the zoo, a team from the park will get the 18 species of animals, which include a pair of Nilgiri Langur, a pair of reticulated python (Malaysian python), four pairs of white peacock and 10 female Sarang birds.

The five-member team, headed by veterinary doctor Sharat Sahoo, has already left for Chennai with 19 animals and is scheduled to return on Monday.

As a part of the exchange, they carried the 19 animals which included a pair of Himalayan bear, a male Siamese crocodile, a pair of water monitor lizard, five pairs of White Ibis and four Openbilled storks (grey cranes).